Opus 4 String Quartet was formed in January of 2015 by string section principals of ECHO (Energy Corridor of Houston Orchestra) for the purpose of participating in chamber concerts sponsored by the orchestra. Opus 4 played concerts at Bridge Point Bible Church, and Green Planet Sanctuary in Houston’s Energy Corridor, as well the Bernhardt Winery in Plantersville, Texas, and right away their desire to perform led them to independently seek other opportunities, with the idea of bringing interesting, eclectic and entertaining chamber music in a casual atmosphere (often including a running dialogue with the audience) to non-traditional settings. The Opus 4 players are Pablo Donatti and Janis Garcia, violin; Don Burell, viola; and Nancy Francis, cello.

The quartet has acquired a varied repertoire, ranging from Vivaldi, Haydn, Mozart and Beethoven to music composed in the last decade. Their standard quartet repertoire includes Dvorak’s “American” quartet, Beethoven’s Opus 18 No. 4, Schubert’s “Death and the Maiden,” the Villa Lobos Quartet No. 1, Aaron Copland’s “Two Pieces for String Quartet,” and Mozart’s G Major and “Dissonant” Quartets.

Opus 4 has performed film music, notably the Psycho Suite by Bernard Herrmann, arranged for quartet by Richard Birchall, accompanied by a slide show of the film’s most stirring moments. George Gershwin’s work “Promenade” or “Walking the Dog” from the 1937 Fred Astaire – Ginger Rogers film “Shall We Dance” is also included in their film music repertoire, along with Astor Piazzolla’s “Tango Ballet” and “Libertango.”

The 21st century has also been an important source of repertoire for the quartet with performances of String Quartet No 16 (Popular Songs Without Words) by New York composer Stephen Dankner, “Fast Blue Village 2” by Australian composer Elena Kats-Cherning, and “A Revelatory Place” by Houston composer Ken Booker. The group recently premiered a movement from Bruce Leon’s string quartet at the Houston Tuesday Musical Club with violinist Richard Baum. 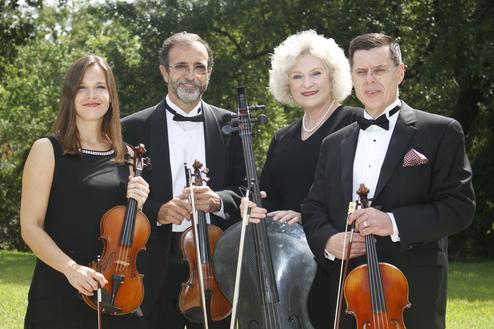 ​Pablo Donatti grew up in Buenos Aires, Argentina, where he studied violin under Rafael Wainhaus and Ljerko Spiller before moving to Mexico to play with the State of Mexico Symphony, and thirty years ago, coming to the U.S. to live in Houston. He has performed with many ensembles in Texas, including the Corpus Christi Symphony where he was concertmaster for twelve seasons and is now performing his 25th consecutive season, and Theater Under the Stars in Houston. Together with all the classical music playing, he has enjoyed playing with the Casarsa Tango Ensemble for eight years. He is now the concertmaster of the newly created Energy Corridor of Houston Orchestra (ECHO) and the first violinist of Opus4 String Quartet.

​Janis Garcia is the second violinist in Opus 4. She has been performing chamber music for over 20 years. Currently, Janis is a member of the ECHOrchestra and Grace Symphony. Janis has played with the Madison Symphony Orchestra, the Rockford Symphony Orchestra, and numerous theatre troupes in New Orleans. While in Madison, Janis was also the fiddle player for a spell in an Irish Rock Band, where she went on tour and was featured in several radio broadcasts with The Kissers. Janis Garcia was featured in the 311 Unity Orchestra for the band 311 on “311 Day” in New Orleans, on March 11, 2014. This performance was released in the spring of 2015 as an LP, a CD, and digital download by 311 records. Mrs. Garcia is the Head Orchestra Director at Arnold Middle School, in Cy-Fair ISD, a position she has held since 2001.

​Don Burell started his musical studies at the age of 9 while attending public school in St. Louis, MO. At the age of 15 he studied for a year with Joan Korman, Asst. Principal Violist of the St. Louis Symphony. After moving to Houston, Donald continued his studies with Wayne Crouse, the Principle Violist of the Houston Symphony. Donald finished his formal musical education by earning a BA in Music at the University of Houston. He has continued to play professionally, both symphonic and chamber music, for thirty years in the Houston area as well as with regional orchestras in Texas and Louisiana. In 2015 he joined the ECHO orchestra as principal violist, and soon after the Opus 4 String Quartet.